5,301 churches by the end of 2008, an increase of 495 churches from the previous year. The main line denominations again the led the way however the movement has rapidly become a world wide phenomena.

Perspective
For close to forty years the gay Christian revival has grown and evolved into the dynamic movement that it is today. What was once ‘hidden’ to most outside of the gay community has now blossomed into a world-wide phenomena that spans across sixty five denominations and thirty different countries. While the revival took root many years ago, most of its phenomenal growth has taken place over the last ten years.

Welcoming Directory
I’ve had the privilege of watching most of this growth first hand from the mid eighties until today. First as a member of a local MCC congregation and then as the founding pastor of a non-denominational church whose primary ministry was to the gay community. As the nineties drew to a close I followed the Lord’s urging to write the book “Calling the Rainbow Nation Home” and start www.gaychurch.org. The web site has many important missions one of which is a global welcoming Christian church directory to help folks find a church near where they live.

The directory itself started back when I was a pastor which was later expanded into a year round pursuit to find other welcoming churches. The directory is now the largest directory of it’s kind in the world with over 5,300 Christian churches listed. At the close of each year I sum up where we’ve seen the growth take place and publish the results in the “Welcoming Church Survey” newsletter. It is in the ongoing maintenance of this directory that I’ve been able to have a ‘cat bird’ seat if you will of the movement unfolding into what it is today.

Two Eras
I think before I share what we’ve seen over the last year a little perspective concerning the movement as a whole would be beneficial. Over the years I’ve come to believe that the movement has gone through two distinct phases. Both can trace their roots back to the late sixties and early seventies however each has had it’s own unique mission, messenger and audience. While their focus has been slightly different, they share a common theme, that being a message of reconciliation. First an invitation to the gay community to ‘come home’ to God and restore their faith and the second being a desire to reconnect with the greater church community.

First Wave: Church planting
The first phase of the movement began with the emergence of MCC in the late sixties and early 70’s1 followed later by ministries such as the Alliance of Christian Churches and the Evangelical Network that appeared in the 1980’s. These groups focused largely on planting new churches that ministered primarily to the gay and lesbian community2. Their ministerial ranks were filled with an exodus of ministers who had been defrocked by ‘mainstream’ denominations because they were gay. Interestingly enough most of these early ministers came from charismatic or Pentecostal backgrounds, the same denominations that were at the forefront of the anti-gay movement that was occurring at that time.

This first wave of the Gay Christian movement was a heady time of church growth and expansion, miracles and evangelistic effort. By the mid 1990’s close to 1,000 churches had been birthed through the efforts of these groups. While relatively small in number, many of these churches and organizations remain an integral and ongoing part of the Christian movement within the gay community today.

The Second Wave: Opening doors
The second era of the “Rainbow Revival” started just a few years after the first however the results of their labor took longer to come to the fore. The vision of these groups was not to create new churches but to enlighten their particular denominations stance toward the gay and lesbian community (see “denominations”). The fruit of their labors began to make a significant impact on the movement by the late 80’s and early 1990’s. It is this second wave that drives much of the church growth we’re seeing today. Groups such Lutherans Concerned. More Light Presbyterians, UCC Coalition for LGBT Concerns, Welcoming and Affirming Baptist, Dignity and Reconciling Ministries Network (UMC) were, and still are, at the very forefront of this ‘second wave’.

This second wave of ministry also included geographically based groups such as Chicago Coalition of Welcoming Churches, Community of Welcoming Congregations (OR and WA) and the New Jersey Lesbian and Gay Coalition whose vision stretched across denominational lines, instead focusing on opening up a specific geographical area for the gay and lesbian community (see “geographic groups”).

Web based ministries such as this one are in many ways, off shoots of this second wave. The one difference being that instead of being ‘geographically’ based, our outreach is to anyone and everyone who has access to the world-wide-web. The vision of Luther nailing up his famous “95 Theses” to the door of the church in Wittenberg was vividly in my mind as I posted our first web pages over five years ago. Now days instead of a church door, we ‘nail up’ our thoughts into the pages of web sites and blogs. Regardless of how the message gets out one thing is clear. These denominationally, geographically and internet based groups have helped to open thousands of church doors to the gay community over the past ten or so years.

Exponential Growth
Regardless of which phase of the movement we’ve been in one thing has remained constant, that being rapid and sustained growth: 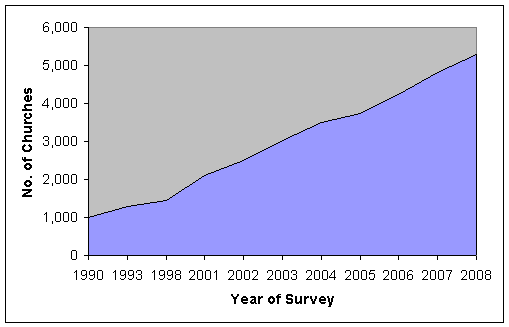 Width and Breadth of the Movement
Like the gay community itself, this is a movement crosses virtually all denominational and geographically based lines. Currently the directory contains sixty five different denominations from thirty different countries. The United Church of Christ leads the way with over 865 churches followed by the Episcopalian churches, Lutheran and Presbyterian churches respectively.

Another interesting footnote is that a fairly significant number of new church adds are not officially affiliated with any gay affirming group within their denomination. I believe this speaks to the broadening nature of the movement as a whole. In addition the movement continues to gain traction outside of the United States in places like Canada (United Church of Canada and Anglican), the United Kingdom (Anglican) and Australia (Baptist and Uniting Churches). In spite of the continuing growth overseas, mainline denominations located within the United States still make up the vast majority of churches and account for over 94% of the directory.

It is interesting to note the changing nature of the movement with the early forerunners slipping to 9th (MCC), 14th (Dignity) and 16th (The Alliance) respectively. While their numbers remain relatively steady, it is clear that the second chapter of this movement is a story of how the mainline denominations began to open up their doors to the gay and lesbian community.

Note: Only denominations that self-identify as being “Christian” are contained in the church directory.

As of January 18th, 2009 the welcoming Christian church directory stands as follows: 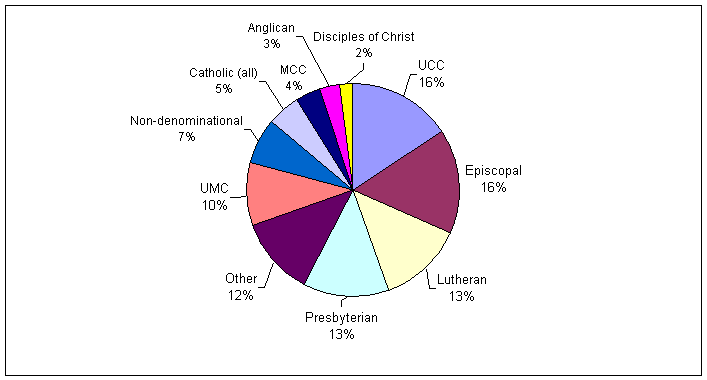 Where do we go from here?
I believe that we are rapidly heading toward an important ‘tipping point’ with many in the ‘straight’ community beginning to hear for the first time about the gay Christian movement. Churches and even entire denominations are starting to loudly proclaimed their welcoming stance toward the gay and lesbian (GLBT) community. The changing political climate in our country is encouraging and enabling a greater degree of dialog between the ‘for’ and ‘against’ contingencies.

In addition, I’m hearing more and more from gays and lesbians who looking for a church that they can call home. In our internet and wireless age people now days turn to search engines and web sites looking for answers to their questions. Some recent statistics someone was kind enough to send to me graphically shows this rapidly expanding growth. I don’t see this hunger for information abating any time soon and believe we are at an important juncture in the gay Christian movement to reach out to our ‘straight’ brothers and sisters in Christ.

Summary
Virtually the same as last year, that being that the gay Christian movement continues to enjoy massive growth with only minimal slowing in sight. The softening political climate here in the States has helped encourage this double digit growth while at the same time this movement has ‘jumped the tracks’ and is no longer a phenomena found in only a few denominations located within the United States. This clearly now is a world-wide movement that touches more than sixty five various denominations. I believe places like Canada and Australia, perhaps the United Kingdom are just now beginning to open up and will help fuel this growth through the next few years. I also believe that before this second wave is over at least one more mainline denomination will step to the fore and officially announce their welcoming stance toward the gay and lesbian community.

I am also quite curious as to what the third wave of this movement will be. It’s quite possible that the forerunners of this 3rd wave of ministry have already stepped forward with the unique vision, mission and message the Lord has given them. If history is our guide, this third wave will have at it’s core the message of reconciliation but have a distinct mission, messenger and audience. I also sense that internet based ministries such as this one will have a key role to play in this next move as we act as a very broad ‘net’ crossing denominational and geographical lines. The next few years should continue to be ones of growth for the “Rainbow Revival”.

Finally I would like to give my heart felt thanks to Eric for the countless hours of research and correspondence he does with the churches. Without his tireless effort, many of the churches we list in the directory wouldn’t be here today. But that is only a part of his ministry. His loving emails back and forth with the churches has given a ‘face’ to the issue and a voice to the cause for those congregations still wrestling with this issue. Again thank you Eric for laboring in God’s beautiful field as you have.