2013 marked a year of major changes for us here at GayChurch.org. Our website was totally rebuilt with modern technology, and we completed a massive sweep-through all of the church listings to confirm that the churches listed were still active. Because of this massive clean-up, while hundreds of churches were added this year, many others were removed. Thus the net year-to-year net gain of 340 churches was strong but not indicative of the activity that transpired over the course of the year. We ended 2013 with 7,457 churches in the directory covering 47 countries around the world.

2013 marked a year of major changes for us here at GayChurch.org. For starters, our website was totally rebuilt thanks to Don Harris. Some of the features of the new website include:

Before bringing over the directory, Don did a massive sweep-through all of the church listings, links etc. to confirm – to the best of our ability – that the churches listed were still active and the links valid. Needless to say it’s a major undertaking to keep up with the churches, especially when some close their doors without notification. Because of this massive clean-up, while hundreds of churches were added this year, many others were removed. Thus the net year-to-year net gain of churches was strong but not indicative of the activity that transpired over the course of the year. 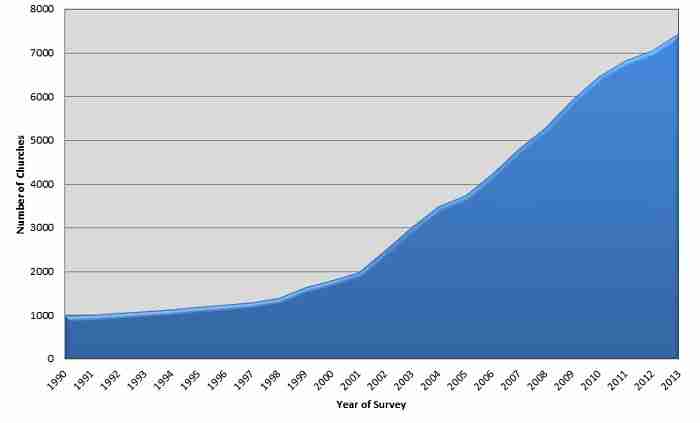 One thing has remained constant, that being that the trends we saw taking place in 2011 and 2012 have continued throughout 2013. Those most notably being the following:

Beyond Affirming Associations and Groups

Currently the top fourteen denominations contained in the directory are: 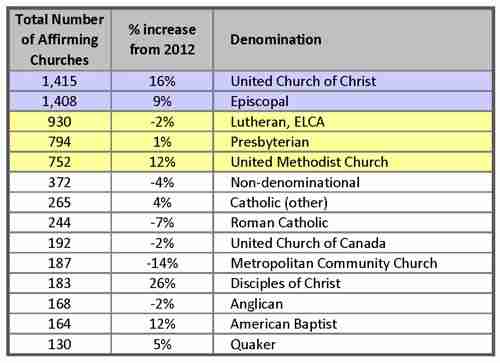 Only denominations that self-identify as being “Christian” are contained in the church directory. 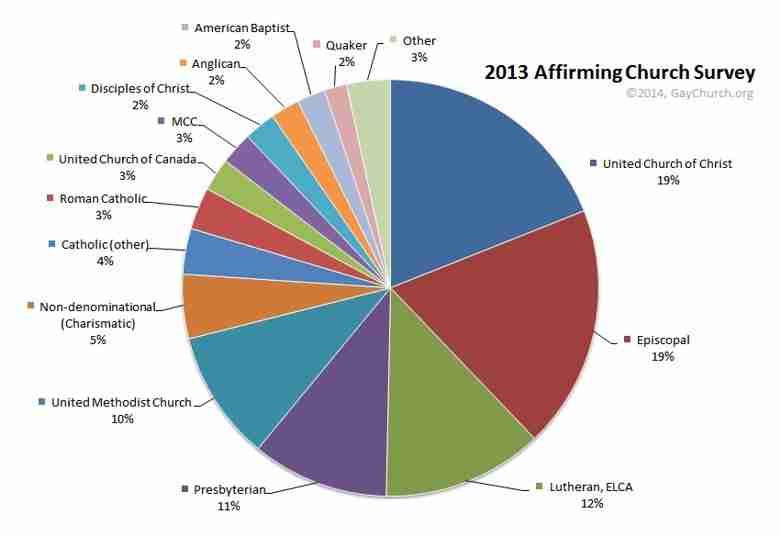 The gay affirming revival within the Christian churches continues to expand at a rapid rate. We have seen this growth reflected; not only in our church directory, but also in the tens of thousands of new visitors to the website that we get every month.

Numbers aside, I believe we are seeing a continuation of a ‘grassroots’ effort which propels the leading edge of this revival: individual pastors, congregants, families, friends, and countless others who are at the heart of this movement. They are what makes it personal, gives the revival traction, and who are willing to do the heavy lifting required to open hearts, minds and eventually – church doors.

In conclusion, I would like to thank Don for completely changing this ministry’s website and church directory over the past year. A Herculean effort that has made it feasible to continue with this online ministry. I would also like to thank Eric for his dedication and heart in this work. Your loving ministry has helped countless number of churches open their doors to our community. As I have said before, together we have a front row seat to a marvelous work that the Holy Spirit is unfolding right in front of our eyes. This truly will be one of the great revivals in the history of the Church before it is done. Truly, this is an exciting time to be in the Lord’s service.

Elaine 🙂
Copyright ©2014 by the author
All Rights Reserved

Copyright © 2003-2022. All Rights Reserved. GALIP Foundation, PO Box 318, Gold Run, California 95717. A 501(c)(3) charitable non-profit organization. Reuse and reprint of this material only by permission of GALIP. gaychurch.org® is a Registered Trademark and Affirming Church Directory™ is a trademark of the GALIP Foundation and may not be used without permission.