3,746 churches by the end of 2005, an increase of 238 churches. A year marked by growth across almost all the denominations with new denominations being added all the time. How many new churches were added this year? How are these churches spread across the various denominations? It’s all here.

Keeping up the “Welcoming” Christian church directory is a massive undertaking with updates done on a daily basis. In addition to this, once a year a survey is done throughout the known welcoming groups and denominations searching for new churches to add to the directory. Emails are sent out to all new churches to verify their welcoming status. Between the daily updates and the once a year survey we have a pretty good idea of how many welcoming churches there are, where they are located and the denomination (if any) they belong to. The results are interesting.

This past year was one of steady growth across most of the denominations. Unlike 2004 when we saw a massive 16+% increase in the number of churches. 2005 was marked by a steady 7-8% rise with over two hundred thirty eight new churches added, bringing the current number of welcoming Christian congregations to 3,746. Now mind you our survey isn’t foolproof and a few welcoming congregations opt out from being listed. However, the numbers are quite informative and give us valuable information as to where the “rainbow revival” is headed.

Another difference between 2004 and 2005 is the way in which the growth occurred. In 2004 most of the increase came from the UCC churches while 2005 saw the growth spread pretty evenly across all the denominations. Smaller denominations not listed in the chart also saw major increases in their numbers. We also saw a jump in the number of denominations to over 35 which have at least one church that has opened their doors to the gay and lesbian community. The graph below shows the growth that we’ve seen in the total number of welcoming Christian churches over the past fifteen years: 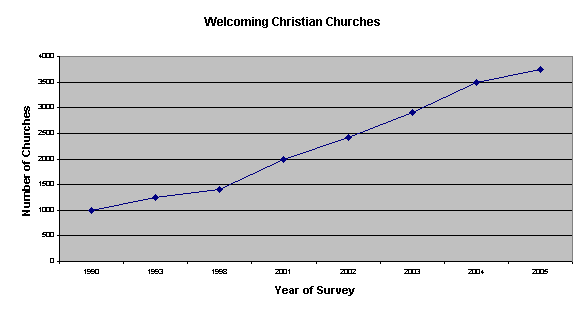 This slowing growth marked by an increase in the number of denominations represented is reminiscent of the early to mid 1990’s when the number of new welcoming churches slowed as M.C.C.’s growth cooled off. During this time the rate in which new churches were being added slowed down, but the number of denominations represented increased. This was an important event, as these new churches acted as the “forerunners” and bridgeheads to their various denominational communities. As time went by, one by one churches joined their ranks until large numbers of churches within that particular denomination openly accepted gays and lesbians into their midst. When a critical mass of accepting churches is reached, the issue is brought before the denomination requesting that official doctrine be one of acceptance rather than rejection. It’s when a denomination officially accepts gays and lesbians that large numbers of new churches come in all at once (e.g. UCC).

What is quite different from the mid 1990’s is that the welcoming congregations no longer represent a small handful of denominations, they now represent over 35 different groups all in various stages of acceptance. So while our growth may slow down for a year or two, we could be looking at a huge influx of welcoming churches in the not too distant future.

The second interesting thing that jumped out at me was the growing number of Roman Catholic churches that declare, as best they can, that they are open to gays and lesbians. Mind you, this is in the face of threatened excommunication by the Vatican. If I included the officially sanctioned Catholic churches with the Catholic churches that have broken away to form their own pseudo-Catholic groups, their numbers would swell to the point they would be vying with the Lutherans for the number four slot on the list. 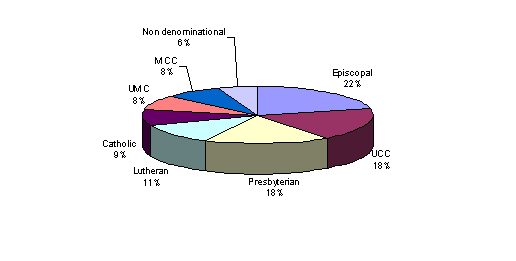 Note: Only denominations that self-identify as being “Christian” are listed.

Copyright © 2003-2022. All Rights Reserved. GALIP Foundation, PO Box 318, Gold Run, California 95717. A 501(c)(3) charitable non-profit organization. Reuse and reprint of this material only by permission of GALIP. gaychurch.org® is a Registered Trademark and Affirming Church Directory™ is a trademark of the GALIP Foundation and may not be used without permission.